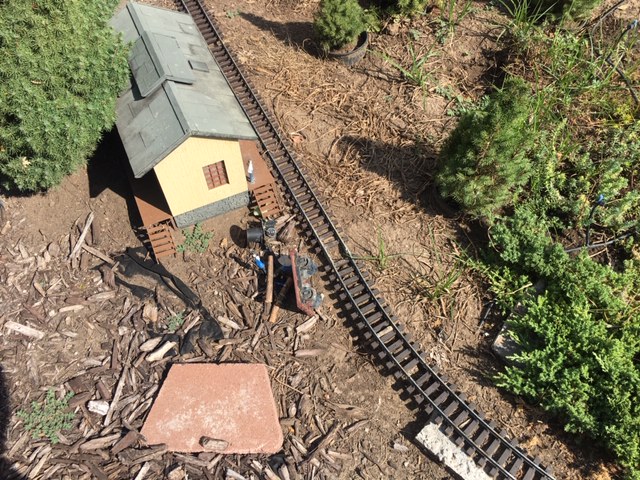 It looks like the loggers have had an accident. Apparently the logging crane came off the tracks near the shed. END_OF_DOCUMENT_TOKEN_TO_BE_REPLACED

It should be something I’m used to by now, but the hot, windy weather has kept me inside most of the summer. I want to run trains, but it’s just too miserable. 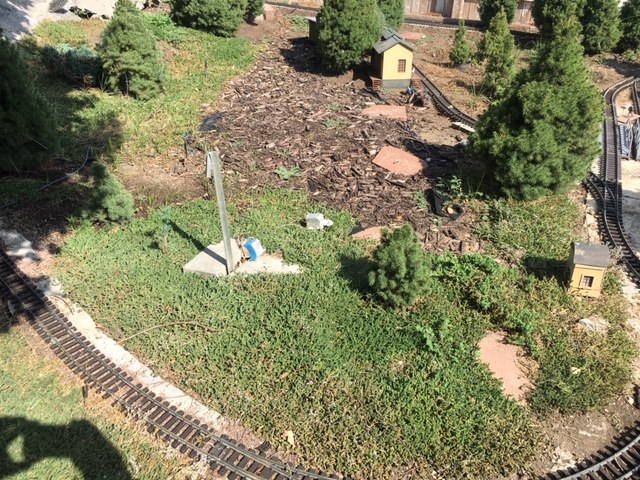 This is the spot where the windmill stood. One of the sails needed some work and the mill owner/postal worker that were out front need their arms reattached. END_OF_DOCUMENT_TOKEN_TO_BE_REPLACED

This winter I didn’t manage to get any of the buildings from the layout inside to refurbish them, which is when I usually work on that sort of thing. So I’ve brought a couple inside. I bought a few additional live steamers in anticipation of spring, but… between school activities being canceled for my three school-age kids and work going a little crazy, that got away from me too.

A few weeks ago I looked out my back window at the layout and realized that the grass had grown up so much that some parts weren’t visible, and the ROW was overgrown with sedum and juniper. I’m having trouble keeping the weeds out–here in Kansas I need to spend a couple hours a week to keep things under control and I’m pretty busy. 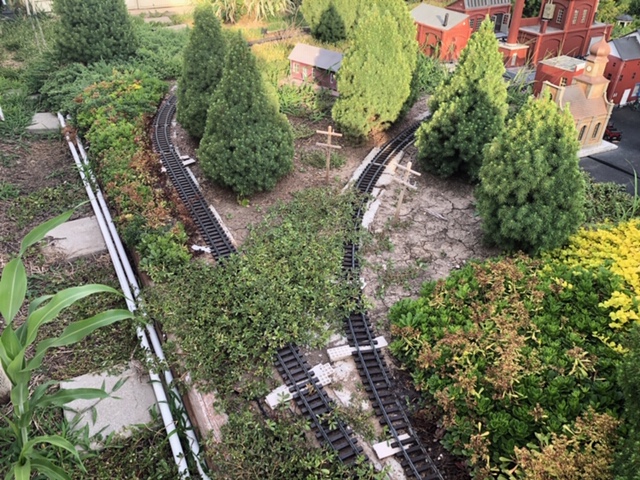 END_OF_DOCUMENT_TOKEN_TO_BE_REPLACED

Usually I get up to some amazing project in the late winter/early spring. I have time on my hands (sometimes) and there’s a lot of enjoyment anticipating some new feature that will be ready for the first few runs of the year. This year I didn’t get to anything.

Well… not exactly. I managed to do two tiny, pitifully small projects. One was refurbishing my logging vignette–I rebuilt the log wagon almost from scratch and created a pair of lumberjacks chopping at a stump/fallen tree. I also fixed up the “getaway” car from my wedding scene. 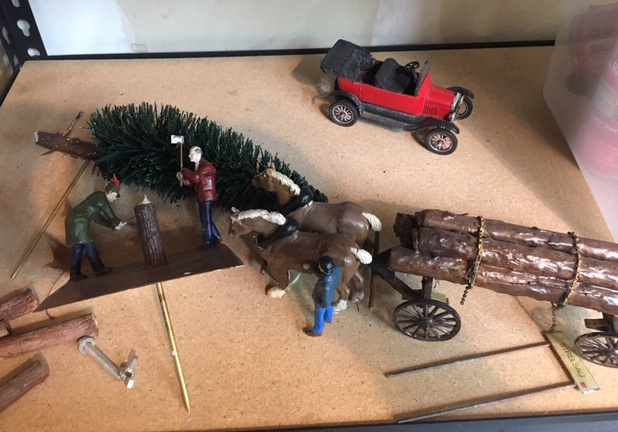 That’s a ridiculously small amount of layout work between November and May, but that’s all I had time/energy for.

The weather was great for running trains and being outside together.

It’s odd to see snow as late as April 15th, but there it is

And thought about my Dora and a Newqida coach

END_OF_DOCUMENT_TOKEN_TO_BE_REPLACED

So, my layout isn’t perfectly flat. I tried to level it when I installed the roadbed and track, but there is definitely a low spot on the front straight and a high spot at one back corner.

For DCC controlled locomotives, which use electronics to maintain a constant speed, this is no problem. For analog engines, it doesn’t really matter as I can increase or decrease the power to the track if needed. But for live steam, which is controlled by the throttle in the cab, it’s trickier.

The solution, of course, is to add radio control to the live steamers using a car R/C transmitter and receiver and a servo to open or close the throttle. As a first step, I’m working on installing such as system in my Saxonian. I fabbed up a servo bracket from aluminum and installed it in the cab. I ran it on a 6′ radius test circle in my garage and it performed as expected.

Next I need to set up a trailing car to carry the battery and receiver. That would allow me to mount servos in the cabs of all my live steamers and just move the R/C car between them depending on which one I want to run. But it does mean figuring out what to do about couplings. My Frank S. has LGB loops, the Dora has link and pin, and the Saxonian has a chopper.

I’ll need to noodle on that a bit.

A couple of months ago I was told I have moderate arthritis in my shoulders. Immediately I thought of how this would affect my ability to run trains. My first thought was that track maintenance is going to be trickier. My second thought was that it would be an excuse to focus more on live steam.

END_OF_DOCUMENT_TOKEN_TO_BE_REPLACED

Ok, you can’t run trains in this… I’m going to need a bigger snowplow 🙂 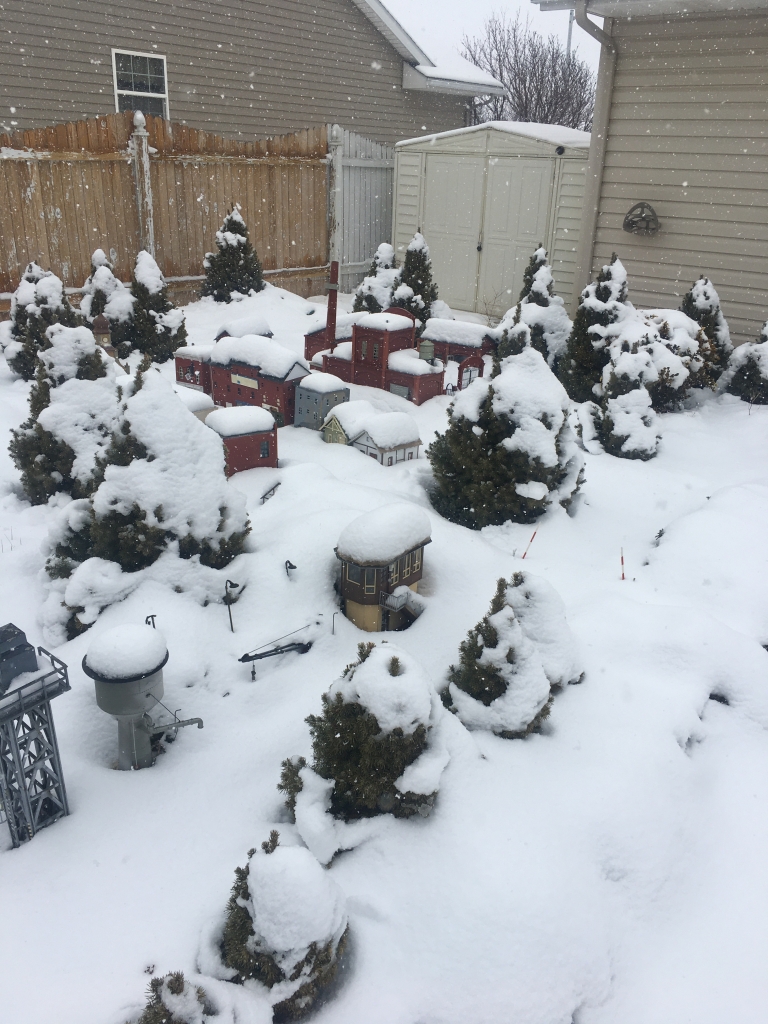 Also, notice the fence… we’ve decided to give up on trying to keep it painted and just let the cedar age naturally.

It’s just enough to be prototypical. About a “foot” of 1:24 snow 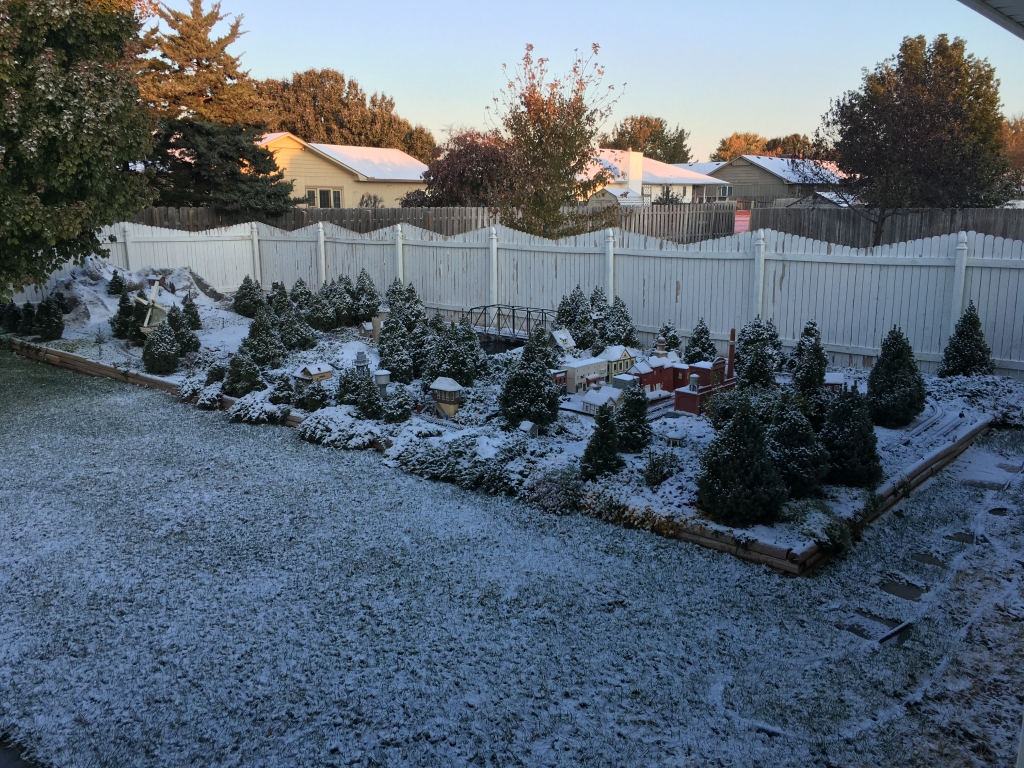 In California, when you don’t plant something, you get dirt. Maybe a little wild oats, but pretty much nothing grows in the desert unless you plant it and then water it regularly. Here in Kansas, if you don’t stay on top of weeding you get wild strawberries, chickweed, and corn. Yes, corn. 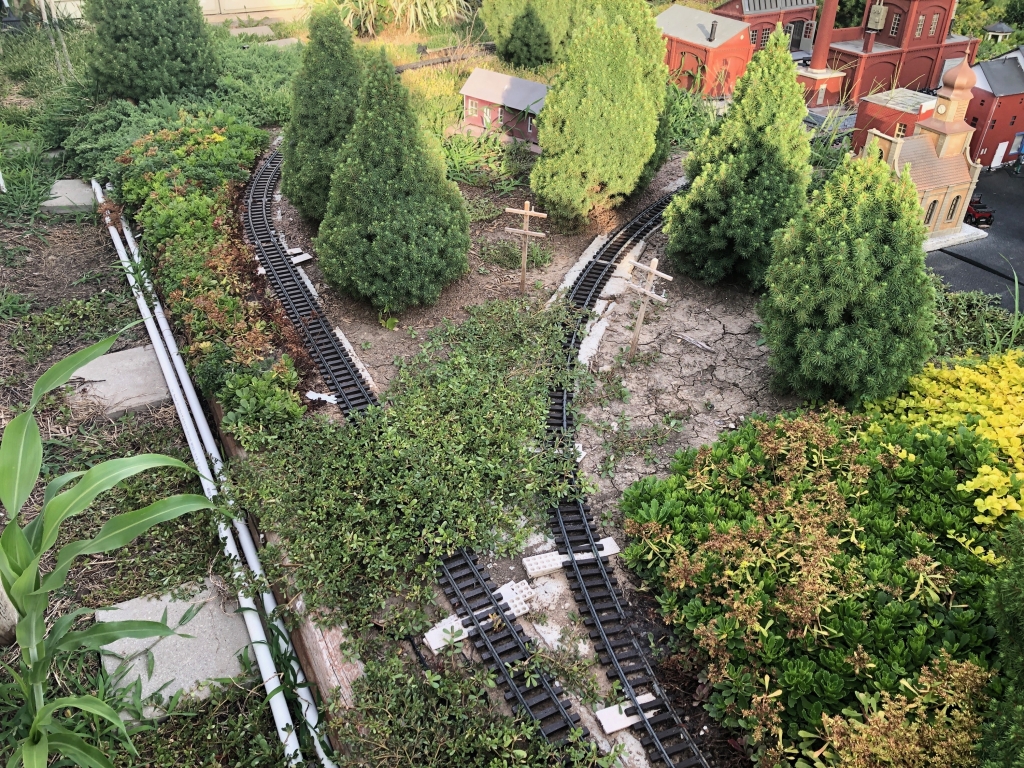 So this year I’ve been pretty much too bust to run trains except on rare occasions when all the stars align. I’ve probably done less than one run a month since January. Because:

The reason we moved here to Mac was for me to obtain another Bachelor’s degree… in Auto Restoration this time. So finishing that up, with my Senior Project, has been filling my days pretty full. Now that things have slowed down on that front, maybe I can get back to trains 🙂 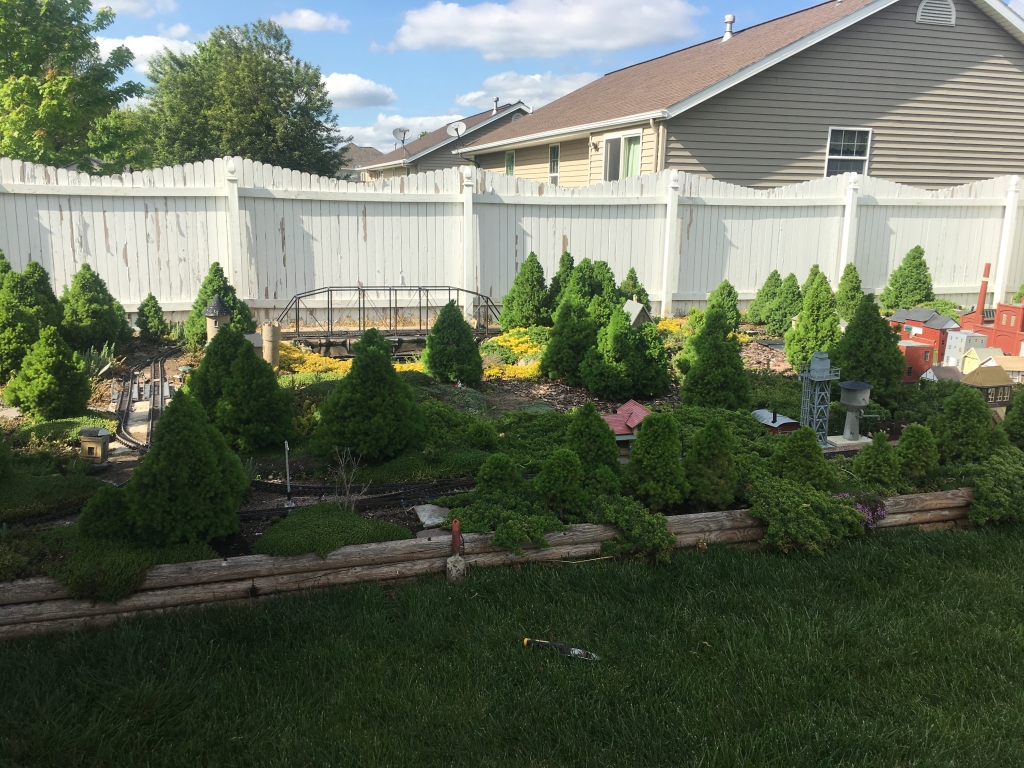 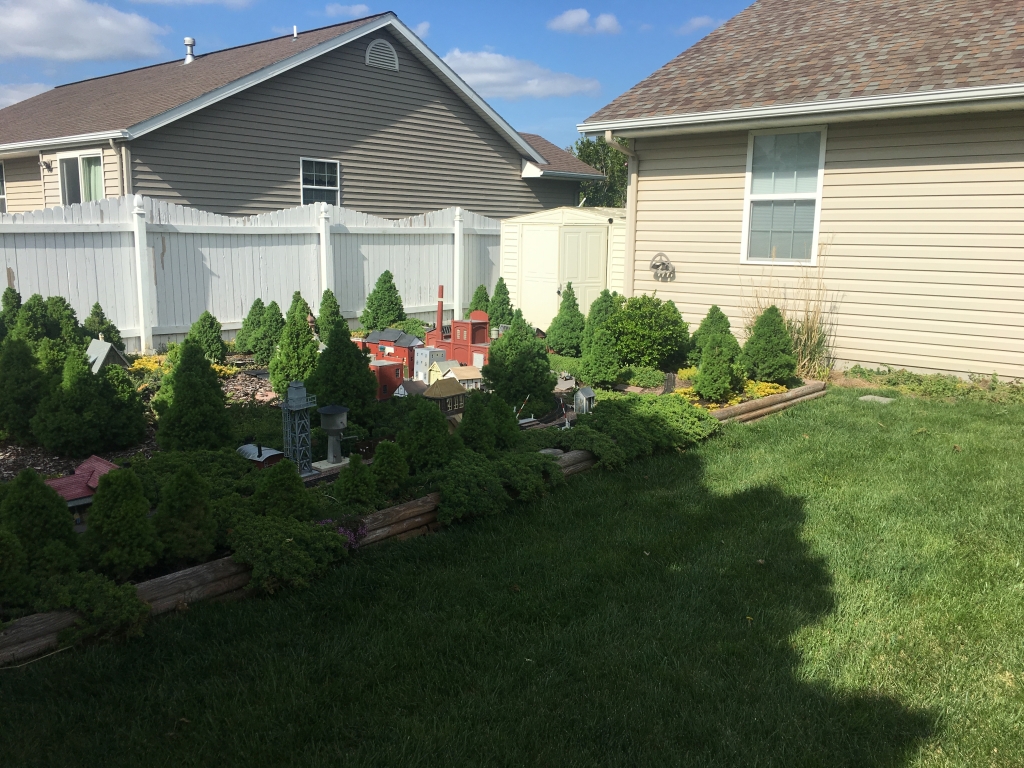 Here’s how it looks when we have a real snowstorm 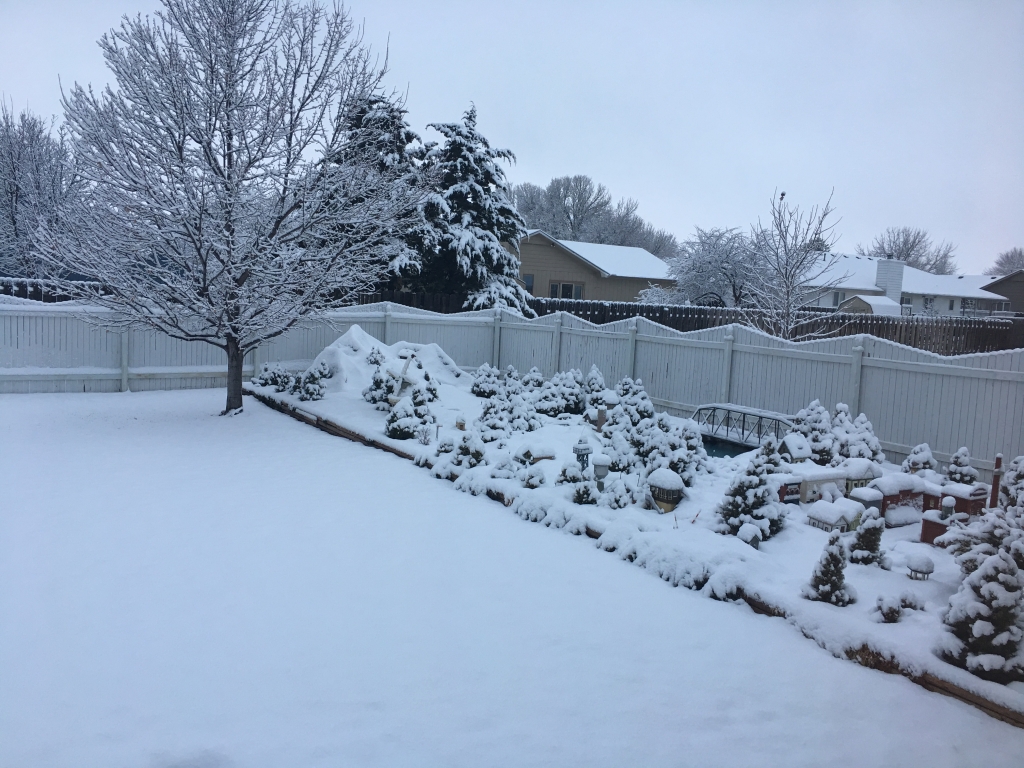